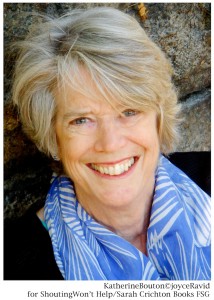 This year on September 20, Mass Eye and Ear’s annual forum on hearing loss issues, “Have You Heard?”  featured a guest appearance by Katherine Bouton,  HLAA Trustee and author of the memoir Shouting Won’t Help!  Why I–and 50 Million Other Americans–Can’t Hear You.

Ms. Bouton’s  highly-acclaimed book, telling the story of  adult-onset hearing loss, was published in 2013 by Sarah Crichton/Farrar Straus & Giroux. She is a former editor at the New York Times, where she was deputy editor of the Sunday Magazine for ten years. She also held senior editing positions on Science Times, the Sunday Book Review, and Culture. Her nonfiction has appeared in The New Yorker, The New York Times Magazine and elsewhere.

Katherine has had progressive bilateral hearing loss since 1978, and in September 2009 received a cochlear implant. Her writing and speaking now focus on hearing loss and other disability issues. Her blog What I Hear appears on the Psychology Today website. She is currently working on a practical guide to living with hearing loss, tentatively titled “Come to Your Senses: Learn to Live Better with Hearing Loss.” She has been a member of HLAA since 2010 and was appointed to the Board of Trustees in October 2013.

The “Have You Heard” forum also included leaders in research on the causes of and treatments for hearing loss:   Dr. Sharon G. Kujawa, Chair, Department of Audiology at MEEI, and Dr. Charles Liberman.