What Is a Loop? 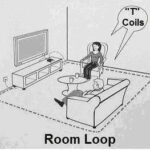 A hearing loop is a copper wire that circles a room and is connected to the sound system and microphone.  The loop electromagnetically transmits the desired sound (usually referred to as “the signal”) from the microphone  over the copper wire. The electromagnetic signal is picked up and received by a small copper coil called a telecoil (or T-coil), a component found in most hearing aids and cochlear implants.

Persons with hearing loss who are able to use hearing aids benefit greatly if their hearing aids are equipped with T-coils. In a looped room, the desired sound (often referred to as the “signal”) is transmitted directly from the source of the sound to the person’s hearing aids via the T-coil. 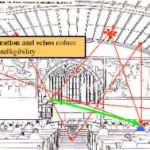 Because a hearing loop transmits  the signal directly to one’s hearing aids or cochlear implants,  “reverberation,” (i.e., sound that is distorted when it travels through space from the speaker to the listener) is eliminated.The red line represents sound energy as it is transmitted through a large space, reverberating and creating an echo that greatly reduces speech intelligibility. The green line represents sound transmitted in a looped space from the speaker directly to the hearing aids of an individual, greatly increasing clarity and intelligibility.

Loops can be integrated into electronic devices such as televisions, and can be installed in private as well as public spaces. 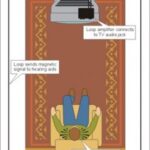 A loop can be connected to a person’s TV, enabling the sound from the program a person is watching to be transmitted directly to the person’s hearing aids.

HLAA’s  Get in the Hearing Loop Task Force

In existence for several years, the mission of the HLAA Get in the Hearing Loop Task Force is to raise awareness of hearing loop/telecoil technology in the United States among both the public and hearing care professionals, and to promote the availability of hearing loops in all public venues.

Among the action items being addressed by the task force are:

Much of the effort has been funded by the David and Carol Myers Foundation. We are grateful for that support along with all the volunteers who work diligently for communication access.